For the yachting professional on the Mediterranean
Showing posts from tagged with: Riviera Wine Academy 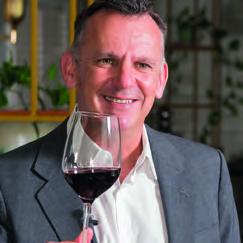 IF YOU’RE LOOKING FOR SOME VALUE IN YOUR VINO, ROD SMITH IS ON HAND TO RECOMMEND SOME OF HIS FAVOURITES FROM AROUND THE GLOBE

If ‘Dry January’ is not your thing – and there is evidence that, while it is good for your waistline and wallet, it nowhere near as good for your liver as good value wine onboard or at home for everyday drinking.
But it is not a time of year for great indulgence, so value is probably high on the list of criteria. Anyone can spend a huge pile of money on a bottle of wine and get a good one, but the real joy in wine is being able to find something excellent without spending a fortune.

Wine regions, producers, or even grape varieties which are less celebrated or famous are your friends here. Locally, many of the wines of Provence constitute good value. Look for reds from higher up in the hills where the summer weather is slightly season they need for full flavour. Along with those from Corsica, and Languedoc and Roussillon, the other side of the
South of France, there are some great bargains especially for warming wintry reds. The last of the 2018 rosés will still be drinking beautifully and are likely to be less than their 2019 replacements, as last summer’s weather was so hot, the harvest was short.

Spain and Portugal have long offered some of Europe’s best values, and this remains true. Look for deep reds and spicy whites from Dao, Alentejo and Douro, in Portugal. Similar style and quality can be found in Spanish areas as diverse as Navarra, Ribero del Duero and Catalunya in the north and Jumilla and Yecla in the south.

Italy’s less well known regions, such as Campania, Sardinia, Puglia and Sicily are gathering celebrity, but nevertheless there are bargains still to be had. For every nowdiscovered Taurasi and Etna Rosso (and even these are still more well-priced than big names from Piedmont and Tuscany), remains a Nero d’Avola from Sicily or Negroamaro or Primitivo from Salento and Manduria still offering excellent quality, often for less than €10 a bottle.

In the new world, it is probably South Africa and South America where the bargains are currently to be had, although such wines are more difficult to find in southern Europe obviously. If you deal with a specialist Yacht Supplier, then there should be a good choice of Shiraz, Pinotage or red blends as well as Chenin and Chardonnay for whites from the Cape. The Rand is weak, and this buys you far more export wine than you would think.

Spain and Portugal have long offered some of Europe’s best values, and this remains true

Argentina is so much more than the always reliable Malbec, and blends involving this with Cabernet or Merlot often offer more complexity and balance. If you can find them then areas beyond the famous Mendoza, such as Patagonia, can offer an extra layer of flavour without adding significantly to the cost. Chile is proving its mettle for excellent Syrah and Pinot from its coastal areas like Leyda and Casablanca, and deeper spicy Cabernets and Carmeneres from further inland in the Aconcagua, Cachapoal and Colchagua Valleys.

As ever, it is a good idea to get to know your local supplier – many of whom will be very grateful to hear from you over the winter. There may also be tastings and special offers for the quiet season. Cheers to an excellent new year and planning for the 2020 season!

Rod Smith MW, from Riviera Wine Academy, is one of only 390 Masters of Wine in the world, resident on the Côte d’Azur since 2007. The MW qualification is the highest possible achievement in the world of wine. Riviera Wine Academy offers wine training, including WSET Courses, for crew and interested wine lovers, as well as organising onboard wine tastings, events, dinners and vineyard visits for guests and wine consultancy for owners during the yachting season.yachting season.
www.rivierawineacademy.com